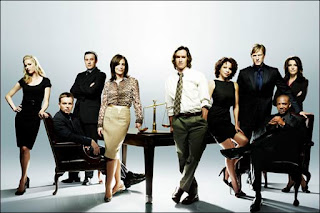 I love tv, so I'm excited about the upcoming fall seasons starting up. Most shows are coming back mid to late September, but TNT has a brand new show premiering today, Labor day at 10pm!

Raising The Bar is the newest television series from Steven Bochco. It is a powerful new legal drama with a great cast of characters including Mark-Paul Gosselaar (NYPD Blue, Saved by the bell), This is the compelling foundation of TNT’s RAISING THE BAR, a powerful new legal drama from Emmy® winning producer Steven Bochco. The gripping series stars Mark-Paul Gosselaar (NYPD Blue), Gloria Reuben (ER) and Jane Kaczmarek (Malcolm in the Middle) and follows the lives of young lawyers who work on opposite sides – the public defender’s office and the district attorney’s office – as well as those who sit in judgment on their cases. The series, which was created by Bochco and lawyer/writer David Feige (author of Indefensible), is set to premiere Monday, Sept. 1, at 10 p.m. (ET/PT).

RAISING THE BAR not only looks at courtroom battles but also the relationships among people on different sides. “The primary characters are a group of young public defenders and prosecutors who go up against each other during the day, but they’re friends and hang out with each other at night,” Bochco says. “They argue and negotiate with each other. They are dedicated players within what we feel is a broken criminal justice system.”

Bochco points out that the series strives to provide a balanced view of the system and those who work within it. “RAISING THE BAR is not geared specifically toward the public defenders or the prosecutors,” he says. “We try to give equal time to both points of view, with an eye toward revealing the extent to which the system doesn’t work very well. It certainly doesn’t have all that much to do with justice. It has more to do with keeping the conveyor belt turning, the idea that if every case in the system goes to trial, the system grinds to a halt.”

In RAISING THE BAR, Gosselaar plays Jerry Kellerman, an idealistic public defender who will stop at nothing to help those who cannot help themselves. Reuben plays Rosalind Whitman, Jerry’s passionate and protective boss. Teddy Sears (Ugly Betty) is Richard Patrick Woolsley, who foregoes a cushy job in his father’s firm to work for the public defender’s office. Natalia Cigliuti (All My Children) is Roberta “Bobbi” Gilardi, a new member of the team who quickly proves she can hold her own against even the toughest courtroom opponent.

On the opposite side, Melissa Sagemiller (Sleeper Cell) plays Michelle Ernhardt, an attorney in the DA’s office who struggles with balancing the need to win cases with the desire to see justice done. She works for assistant DA Nick Balco, played by Currie Graham (Boston Legal), whose razor-sharp knowledge of the law is countered by his easy manipulation of it. They are joined by J. August Richards (Conviction) as Marcus McGrath, who is relentless in putting criminals behind bars.
The courtroom arena where they face off belongs to Judge Trudy Kessler, played by Kaczmarek. She is imperious, treating the courtroom as her own private fiefdom as she prepares to make a political run to become the next district attorney. Working for her is law clerk Charlie Sagansky, played by Jonathan Scarfe (Into the West), a man with a wealth of secrets.
RAISING THE BAR comes to TNT from ABC Studios and Bochco Media, with Bochco serving as executive producer. Bochco and Feige wrote the story for the pilot episode, while Feige, who also serves as supervising producer, wrote the script. The pilot was directed by series co-executive producer Jesse Bochco (The Closer).
ABC Studios is a leader in the development, production and strategic distribution of entertainment content across television and emerging digital platforms. As a key content driver for the Disney-ABC Television Group, the studio will produce 22 productions for broadcast and cable television in the 2008-09 season.

Turner Broadcasting System, Inc., a Time Warner company, creates and programs branded news, entertainment, animation and young adult media environments on television and other platforms for consumers around the world.

Email ThisBlogThis!Share to TwitterShare to FacebookShare to Pinterest
Labels: tv

I watched this show last night! I thought it was pretty good! And I agree he needs a haircut!

Jane was a crazy nut judge, huh? And I loved the twist at the end, where her boy toy is playing both sides of the deck.

I'll definitely be watching it next week.